We travel the world to connect people with the finest tea and coffee products. Our customers represent a multitude of industries and have a common appreciation for the quality and service that we deliver.

Many tea and coffee varieties are grown and harvested in some of the most remote and inaccessible corners of the world. As you can imagine, a successful tea and coffee importer & supplier is not only well traveled in these regions, but also well connected within their markets and ports. 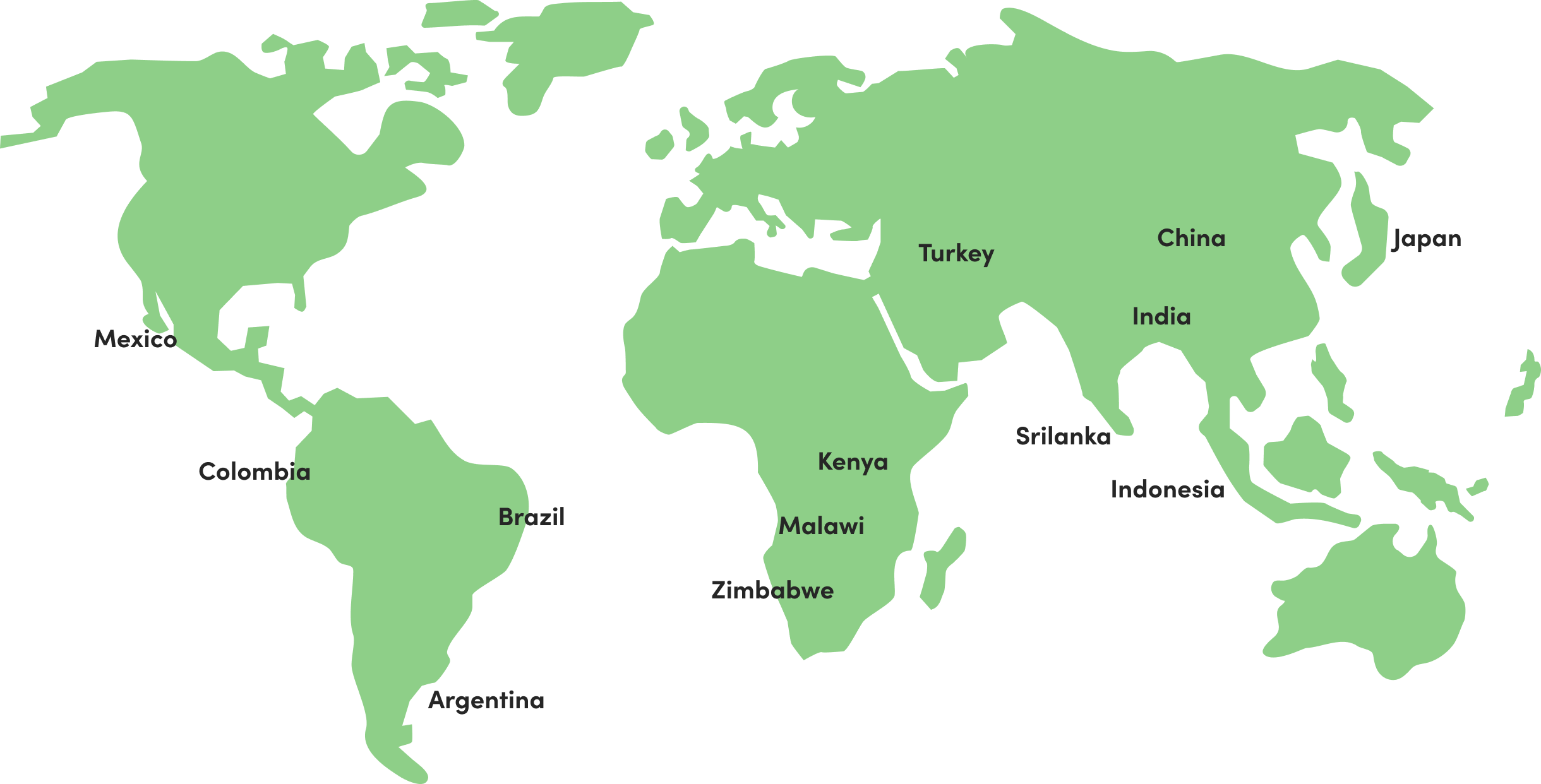 – How much Colombian Instant Coffee is exported per year? 1.4684 tons / year

– How many hectares of coffee plantations are there in Colombia? 800 000 hectares (cultivated by 540.000 families)

There are 2.400.650 hectares of coffee plantations with 5.457.620 million trees in Brazil. Picking season starts in April with the beginning of the Robusta crop and lasts until the end of September when the Arabica crop planting finishes.

Argentina is fairly new to the tea world as a producer. Tea was first planted in Argentina shortly after WWI, but the tea producers did not begin exporting any great quantities until the 1950’s. There are two tea growing areas in Argentina, North Corrientes (about 6% of production) and Misiones (about 94% of production). The amount of tea produced by Argentina is impressive, nearly 50,000 tonnes of tea is produced per season.

Teas from Argentina tend to have more neutral flavours which are good for blending. The majority of the harvest finds its way into the iced teas of North America. Argentinian tea has the unusual property of remaining clear when poured over ice. Most teas become cloudy when subjected to the shock of ice. Harvesting is completely mechanised. The harvesters straddle the tea bushes and mow the tips as they advance down the rows.

Tea was first grown commercially in Zimbabwe in 1924 on the New Year’s Gift Estate from seeds smuggled from India. The growing of tea did not really become established until the 1960s. Today, the two main tea growing areas are Chipinge and Honde Valley.

Zimbabwe has an average annual rainfall of not more than 65 cm per annum, as opposed to the 125 cm per annum usually required for commercial growing of tea. Tea growing on a commercial basis could only begin after the establishment of irrigated tea estates. Today, tea is a “controlled” commodity in Zimbabwe so that its quality and industry growth are protected.

The majority of tea produced in Zimbabwe is sold for the UK tea bag market.

Malawi is the pioneer of tea growing in Africa, with production first starting commercially in the 1880s near the town of Mulanje.

Malawi exports over 38,000 tonnes of tea per annum. It has a 1.4% share of world exports and is mainly responsible for the spread of tea cultivation in Africa. Teas are exported to Europe where many of the famous blends are produced. Ireland is one of the major importers of African teas.

The main tea growing area of Malawi is in the Mulanje District. Growing regions are located mainly far south in Thyolo, Malange and Shire Highlands’.

Kenya’s equatorial climate allows tea growing all year round. The teas are very bright, colourful, with a reddish coppery tint and a pleasant brisk flavour. Kenya speciality tea is ideal as a drink for any time of day. It is also blended into many famous British brands.

Kenya is one of the oldest of the African producers. The first tea bushes were planted in Limuru in 1903, when tea seeds from India were first planted on a two acre farm. Today, Kenya has over 122,000 hectares under cultivation by smallholders (sham bas), under the protection of the Kenya Tea Development Authority, and tea producing companies in the public and private sector. Kenya exports almost 217,000 tonnes of tea per year. or 8% of world exports, making Kenya the biggest exporter alongside Sri Lanka. One half of all tea imported into the UK comes from Kenya.

The main tea growing areas are located the Great Rift Valley in the Kenya Highlands. One of the most well-known tea gardens. Marinyn produces a high quality leaf tea similar to Assam.

Tea (cay) drinking became popular in Turkey in the 1920’s when the Ottoman Empire collapsed and coffee became very expensive. Cay is served everywhere in tiny gold-rimmed, tulip-shaped glasses accompanied by two or three lumps of sugar. It is common to be offered tea in shops and considered polite to accept a second glass.

Almost all Turkey’s tea production takes place in the north west of the country in the area around Rize. The city of Rize is built on a mountain slope on the edge of the Black Sea. The slope is covered with tea bushes and produces the best Turkish tea.

The main tea growing area is Rize, located 75km east of Trabzon which is one of the smallest provinces of Turkey but one of the most important since it is the tea industry centre. The city is built on a mountain slope covered with tea bushes. During the summer Tea Festival you can purchase the best blend of Turkish tea.

According to Chinese mythology, in 2737 BC the Chinese Emperor, Shen Nung, scholar and herbalist, was sitting beneath a tree while his servant boiled drinking water. A leaf from the tree dropped into the water and Shen Nung decided to try the brew. The tree was a wild tea tree.

For hundreds of years China produced the only teas known in the Western world. It still accounts for 23% of world exports. China produces black teas and five other main types for which the country is famous: Green, Golong, White, Flavoured and Compressed teas. Most teas from China are not easy to find apart from Lapsang Souchong, Gunpowder and Keemun.

Tea is grown in 18 regions of China, the most significant are the south Eastern region, Yunnan, Sichuan, Hunan, Anhui, Zhejiang, Fujian and Hainan.

India is the world’s largest producer of tea, with more than 13,000 gardens. India exports more than 28% of the world’s tea with over 480,000 hectares under cultivation. The first commercially produced teas were raised from seeds brought from China. By the 1840s, India was producing regular shipments for sale at auction in London, and gradually the planting of estates grew throughout the country from Nilgiri in the south to Darjeeling in the north.

The plantations range from low-grown areas (sea level up to 610 m) to high grown (more than 1,220 m high). Generally plucked from March to October, each area produces teas of distinctive character.

The picking season for Assam tea begins in March, when the tea plants come to life and lasts until mid-December. The tea plants are dormant from mid-December until March. The first flush is late March to June and the second flush from June to August. The flavours of Darjeeling tea differs from season to season. According to the plucking period.

The seasons are:
First flush (Easter flush) from late February to mid-April;
Second flush (Spring) from May to June,
Summer flush from July to September,
Autumn flush from October to November.

Nilgiri, is a very warm and fertile region, capable of producing teas all year round. The first flushes are picked from April until May, and account for 25% of the region’s total harvest. The second flushes, 40% of the region’s total harvest, are picked from September until December. The regions best teas are third flushes, harvested during December and January. The teas from August are also very good.

Tea growing accounts for about 12% of the land use, and provides 280,133 tonnes of the world’s exported tea. This is 10.4% of the world’s total tea. The Sri Lankan tea industry is the country’s largest employer providing jobs directly and indirectly to over a million people. Direct jobs are picking and processing whereas indirect jobs include transporting, packing and administration.

In 1972, the island then known as Ceylon reverted to the traditional name of Sri Lanka, but kept the name of Ceylon for the marketing of teas as the tea of Ceylon was enjoyed by so many.

Each level produces teas of unique character. By blending teas from different areas of the island, Sri Lanka can offer a very wide range of flavour and colour.

The main tea growing areas of Sri Lanka are Dimbula (west of the mountains), Uva (east of Dimbula) and Nuwara Eliya (the highest area(. The picking seasons are January/February for the western slopes and August/September for the eastern slopes.

Tea has been part of the way of life in Indonesia for more than 200 years, The tea trade was founded by the Dutch in the 1700’s. The Indonesian tea industry was effectively destroyed by World War II and it took many years before the plantations recovered. It was not until 1984, backed by the newly-formed Tea Board of Indonesia that a program for the introduction of improved tea varieties was started.

By 1984, after a lot of hard work and investment, tea exports from Indonesia began to make their mark on the tea market. Since that time, improvement in tea production and replanting of old estates has continued, with the factories investing in new machinery.

Indonesia now produces approximately 5.4% of world tea exports. Java and Sumatra are the main growing areas. All teas from Indonesia are light, flavourful, and bright in colour. They are mostly sold for blending but they are now producing their own speciality tea.

Tea has been grown and drunk in Japan for hundreds of years. Though everyone agrees that tea came from China, some say it was brought from there by a monk called Dengyo Daishi in the 9th Century. Others claim it was introduced by a Buddhist monk, called Eisai who planted seeds he brought from China in 1191.

Eventually plantations were established at Asahi, Kambayashi, Kyogoku, Yamana, Umoji and among the fertile soils of Uji. This region still today produces the finest Japanese tea.

From the 1890s onwards, Japan established tea associations to control the quality of Japanese tea. Only members of tea associations could buy and sell tea and you could be arrested for producing inferior tea.

Early season Sencha, the new season tea or shin cha, are generally regarded as the best of the year’s crop, and different regions compete on quality and seasonal availability. The main tea growing areas are Shikoku, Kyushu, the Southern half of Honshu, Kagoshima, Nara, Kyoto, Saga, Fukuoka

Selected A. Holliday
products are certified

Every one of our products is tested for quality and freshness

To ensure our products are of the highest possible quality, our Canadian headquarters is equipped with its own sampling and tasting lab.
Learn More

A. Holliday & Company is a proud member of the following trade associations